The third installment of Full Frontal, the JavaScript conference hosted each year in Brighton by LeftLogic, was a great event once again. I was lucky enough to be a speaker this year, which perhaps gave me a slightly different perspective of the day, but as an enthusiastic attendee I also found it to be an excellent experience. 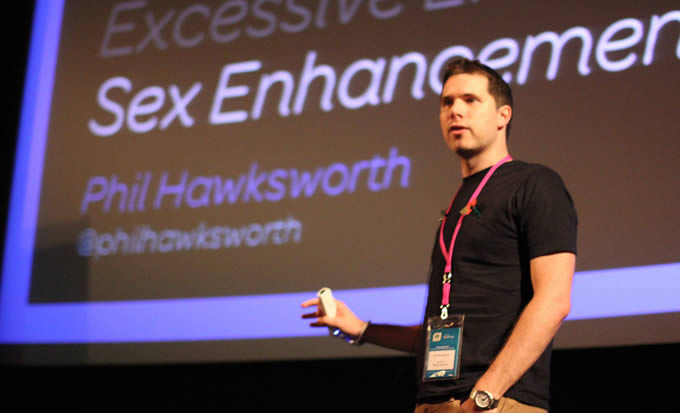 Something that strikes me about Full Frontal is that it has established itself in just two years to be a really valuable addition to the web development conference calendar. Never mind the speakers who Remy managed to secure (I found myself among an impressive line-up of established conference speakers and well-respected technologists - somewhat daunting for my first outing as a proper conference speaker), but also just a glance around the venue at the delegates revealed a gathering of some amazing talent. Clearly, over the last couple of years, Full Frontal has been doing something right just to attract so many big brains.

This all added to the sweat on my brow, and the shortness of my fingernails as my time on stage approached.

As it turned out my talk, entitled Excessive Enhancement, was very well received. This was incredibly encouraging to me given that it was something of a cautionary tale, and delivered to a crowd of smart developers who wanted to learn about exciting new techniques and opportunities for interesting 'browser shizzle'.

Many people who were nice enough to complement me on my talk at the after party (a nicely judged event in itself with a generous kitty behind the bar - thanks Remy and sponsors!) commented on how important my main message, of caring for the Web regardless of the cool effects we can create, was also important to them. That is an extremely positive thing, which might perhaps reflect on the kind of people that this conference attracts, but hopefully also points to a wider community of folks who share a similar set of values which can only be a good thing for the Web.

Everso slightly unfortunate, was the fact that almost every photo I've seen from my talk, features me standing in front of a giant sign saying "Sex Enhancements" (as you may have spotted above). I guess that's the price you pay for being a smart arse and/or channeling the chatter happening on Twitter!

The slides from my talk are available on SpeakerDeck

I was interested to hear what Jeremy Ashkenas had to say about CoffeeScript, as I had to admit to being a little hesitant to embrace it myself. In Jeremy's session, he described some of the design decisions involved when he created the language and demonstrated some beautifully intuitive and expressive features. Much to think about. When I spoke to Jeremy and mentioned my hesitance due to concerns around debugging tools and adding a layer of abstraction atop JavaScript he replied that this was a common concern from people who have not tried CoffeeScript, and that it is seldom a problem for those using it. Perhaps I'll give it a whirl.

Both Marijn Haverbeke and Rik Arends gave fascinating presentations on the state of rich text and code editing in the browser from slightly different angles, with Rick demonstrating the rather splendid looking web-based Cloud 9 IDE. This is evolving into a really compelling IDE and has some beautiful integrations with GitHub and Heroku for all manner of integrated workflow and deployment strategies. Rather nice, and certainly one to watch as the pace of development at Cloud 9 seems to be steadily increasing.

I enjoyed every talk during the day, but the two which really entertained me and got me thinking most were Glenn Jones, who demonstrated umpteen different examples of uses of emerging browser APIs, and Marcin Wichary of Google who showed us a glimpse into the world of creating the Google Doodles we all love.

Glenn's demonstrations were superb and provoked all kinds of discussion at the after party. He also gave a great introduction to Web Intents. You can see his slides and demos on his blog.

Marcin was superbly entertaining and gave us all a fascinating glimpse into what goes into the creation of the interactive Google Doodles such as the Pac Man and Jules Verne doodles. With such a premium on optimisation and reach, the inventive techniques employed on these 24 hour delighters are cheeky and inspired. Marcin demonstrated some of those to us brilliantly through his slick, web-based presentation rig. Crafty bugger!

From the conversations I've had, Full Frontal is set to be popular again next year. Thankfully I've got a free ticket already in the bag as a reward for speaking this year (thanks again Remy!). Otherwise I'd certainly be monitoring the @fullfrontalconf twitter feed for news of when to grab a ticket next year before they get snapped up.