Yesterday I was fortunate to be able to make the quick trip over to Paris to attend a meeting of TiddlyWiki enthusiasts at TiddlyParis. Arranged by long time TiddlyWiki community member and Una Mesa stalwart Saq Imtiaz, this event was a great chance to put some faces to the names of some of the TiddlyWiki developers and users whose work I have been enjoying and benefitting from for some time. 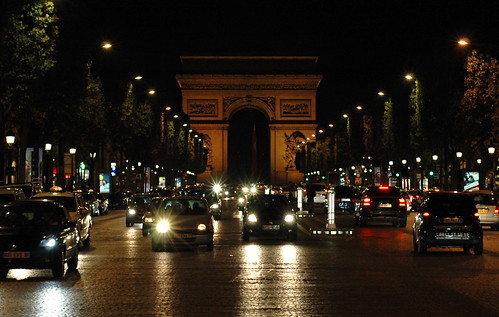 Gathering in a funky bar on the Champs Elysees, the 10 of us shared a beer or two and got to talk about what we were all doing with TiddlyWiki and get to know each other a little better.

The spectrum of TiddlyWiki experience was pleasingly broad.

Zap recently found TiddlyWiki and is using it to manage his notes and background material to support the effort in writing a novel. He is also tinkering with TeamTasks and made the observation that once you start experimenting with ways to customise and extend TiddlyWiki, you can easily find yourself absorbed in the endeavour. Ideas spring forth even faster than you can execute them.

At the other end of the spectrum we have Jacques, who has been working with TiddlyWiki since the very early days. Jacques showed us all his TiddlyWiki PIM on his 4 year old tablet PC. The file was well over 3MB in size (something of a beast in TiddlyWiki terms) chock full of content and heavily customised. I mean really heavily customised! Jacques had moulded it to fit his way of working and had borrowed from the best TiddlyWiki adaptations around the web. With advanced workflow management and various task lists, widgets and doohickies, I found it a bit hard to drink it all in, but it was a perfect fit for Jacques and goes everywhere with him. Jacques pledged to make a blank copy available at some point. You'll need to speak French though as he had also carried out extensive translation.

I was delighted to learn that relative newcomer Pier, whose Google Maps / TiddlyWiki mashup gathers information about popular activities and movements around Paris, chose TiddlyWiki primarily because of its ease of use as a mashup platform. Score! (He was also attracted by the snazzy tiddler animations!)

Loic Dachary revealed several TiddlyWiki resources which have been around for a while, but I had failed to stumble upon. Perhaps targeted at the more techie geeks among us, they were impressive nonetheless. My favorite was TiddlyWiki_CP which is a ruby gem providing a library and a command line interface to copy TiddlyWiki tiddlers to files and vice versa. Incredibly useful for any developer who builds a variety of TiddlyWikis.

I was very keen to meet BidiX who has quietly been producing great TiddlyWiki assets for some time. Recent work includes iTW, the best iPhone TiddlyWiki that I know of. The TiddlyParis edition of iTW went with me in my pocket to help me find the venue and read about the agenda. BidiX is also the man behind TiddlyHome, a lovely and seemingly simple hosted TiddlyWiki resource which he recently deployed to Google App Engine for its next release (which we got to play with, but he insists isn't quite ready for prime time yet).

For my part I spoke about TeamTasks, which I was happy to learn was being used to some degree by several people around the table. I also answered questions about BTs interest in TiddlyWiki and motives for being involved in such a project and community. I'll not go over that again here, as it has already been well articulated by several of my colleagues on their blogs.

I went on to talk about a new pet project of mine which, following the TiddlyWiki convention for absurd names, has been dubbed JigglyWiki. (As it turns out, the French accent lends this name much more gravitas due to the soft 'j'. Marvelous!) JigglyWiki deserves a blog post of its own. For now, through, let's just describe it as and experiment to explore what TiddlyWiki 3.0 might be like if it were to be developed from the ground up with the use of the jQuery javascript library and adopt an unobtrusive Javascript approach.

JigglyWiki (I can only hear that in a French accent now!) created quite a bit of discussion. Proppy and Loic Dachary were particularly vocal about the potential for a TiddlyWiki implementation benefitting from unobtrusive javascript and built in a modular way with a library such as jQuery. Debate raged about the need for a javascript library to properly manage plugins and dependancies. A topic that I'm sure I will be discussing more in a later post.

My thanks go out to all of the folks I encountered at TiddlyParis. Not only for their passion about TiddlyWiki, but also for making me feel so welcome and for conducting the entire event in English rather than in French which I know required considerable effort from some. For what it's worth, my French stretched far enough for me to order my meal (which was bloomin' great) and a few drinks without totally shaming myself. Big thanks also to Saq Imtiaz for putting it all together. When's the next one?!